L.I.T.N. wishes you and your family a joyous Pesach - Passover!
Passover begins Friday, April 15th at sundown and continues until nightfall Saturday, April 23rd.
*Please note: The permissible time for eating of Chometz ends on Friday morning.
The latest time for eating Chometz in Huntington, NY is 10:40 am.

For more information regarding the significance and observance of Passover, please click here.
L.I.T.N. wishes you ​and your family a 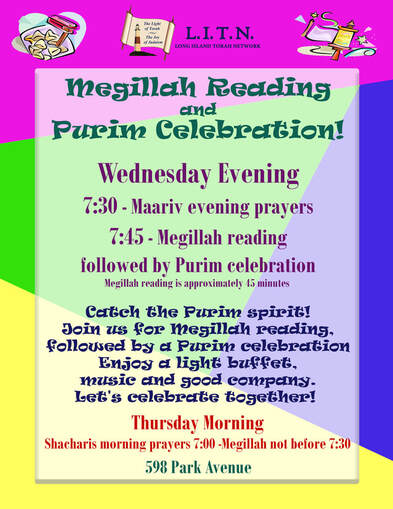 Thanks to all who joined our Chanukah celebration and helped make it such a wonderful event!

The Holiday of Sukkos begins at sundown on Monday, September 20th
To learn about the meaning, observances, and traditions of Sukkos, please click here

For an overview of the meaning and observances of Yom Kippur, please click here 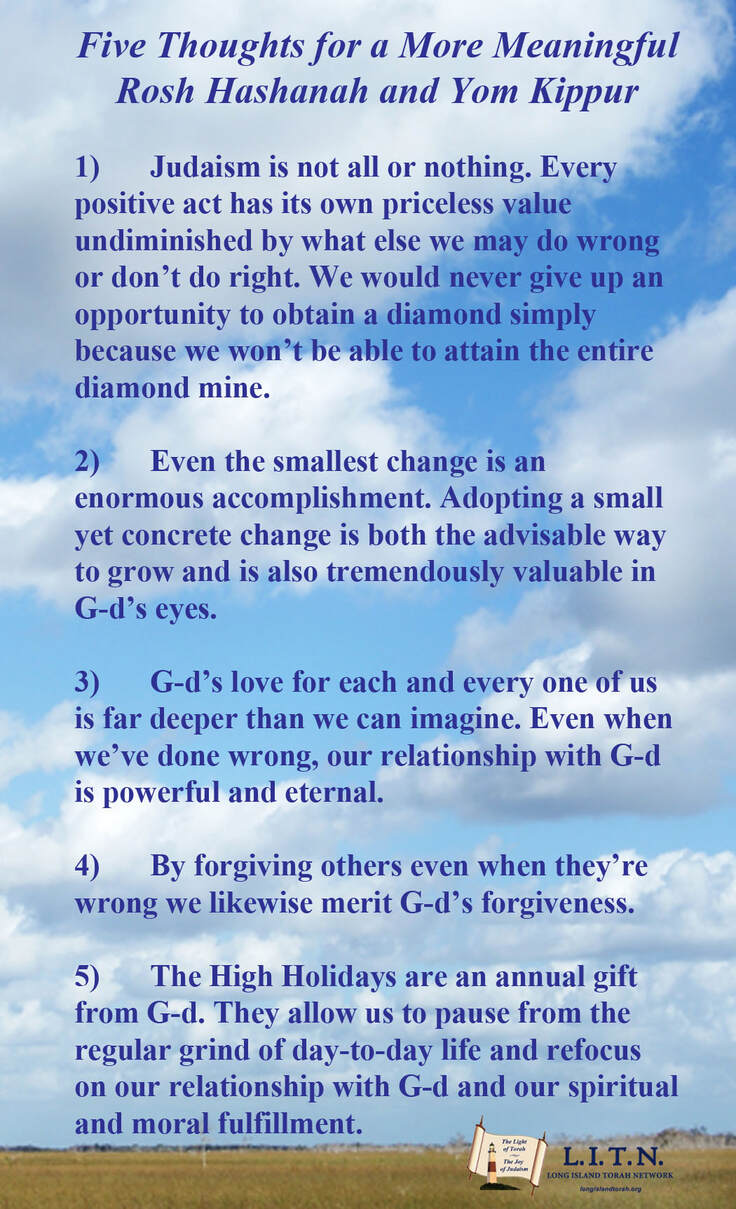 The fast of Tisha B'Av begins this Saturday night at sundown (8:22 pm in East Northport*)
​and ends at nightfall on Sunday night (9:07 pm)
*For other locations, click here and enter the zip code or city
The fast of Tisha B’av commemorates five tragic events in Jewish history:
1) The Jews should have entered the Promised Land soon after leaving Egypt. However, a negative report from the Ten Spies succeeded in demoralizing the people, and they lost courage and refused to enter the Land. The night that they cried and expressed their lack of faith was the night of Tishah B'av. As a result, that generation lost the chance to enter the land; it was the next generation who would do so, after forty years' wandering in the desert.
2) The Temple in Jerusalem, planned by King David and built by his son King Solomon, was destroyed by the Babylonian King Nevuchadnetzar, after standing for 410 years. The Jews endured a seventy-year exile in Babylonia.
3) The Second Temple, built by Ezra and returnees from the Babylonian Exile, was destroyed by the Roman Emperor Vespasian and his son Titus, after standing for 420 years.
4) The city of Beitar, headquarters of the great leader Bar Kochba, fell to the Romans, who massacred the inhabitants. At one time, as great a scholar as Rabbi Akiva believed Bar Kochba could be the Messiah who would free the Jews from Roman oppression. The ultimate fall of the city of Beitar was considered a tragedy on the scale of the Destruction of the Temple.
5) A Roman ruler named Turnus-Rufus plowed the ground where the Temple has once stood, fulfilling the Biblical prophecy, "Zion shall be plowed over like a field."

Two other well-known events took place on this day later in Jewish history:
1) In 1492, the Expulsion of the Jews from Spain, by decree of King Ferdinand and Queen Isabella. After a century of persecution, all Jews left Spain forever, leaving behind only those who chose to live as Christians, practicing Judaism in secret and in constant terror of the Inquisition.
2) In 1914, the outbreak of World War I - an event which destabilized centuries of Jewish life in Europe, and ultimately set the stage for World War II and the Holocaust.
Please click here for more information about the observances, customs and meaning of Tisha B'Av

This year, the Seventeenth of Tammuz - which is the anniversary of the day when the walls of Jerusalem were breached - is Sunday, June 27, Tishah B'Av - the day when both the First and Second Temples were destroyed - is Sunday, July 18th. The Three Weeks is the period between the two tragic days. More info

As we approach the day of Tisha B'Av, join us for a multimedia presentation as our guest lecturer, Rabbi Hayim Schwartz will bring the history of Jerusalem and the Holy Temple to life. Be inspired and discover how as Jews, we are part of both an ancient history and an eternal future. 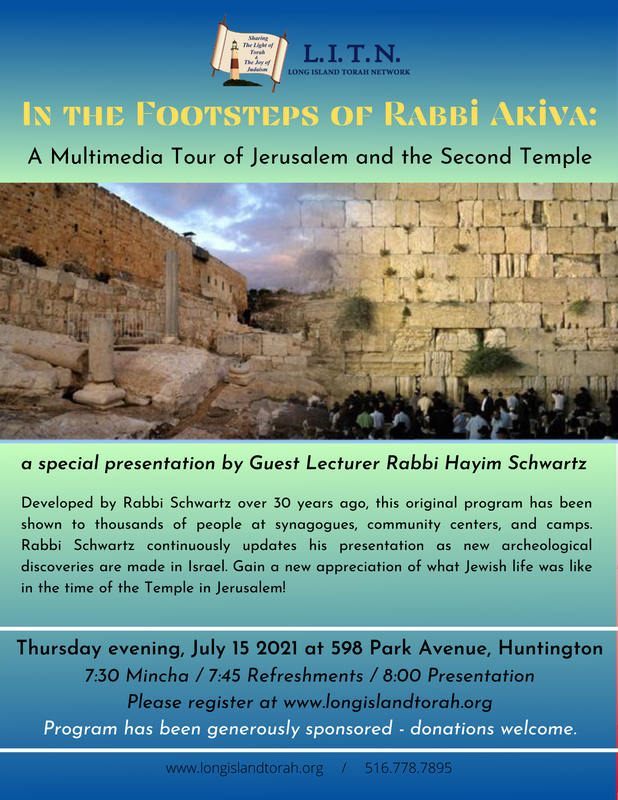 The SederBox is back! Once again, we are offering a kit to enhance your Passover experience - whether you're a veteran or you've never run a Seder before. ​

L.I.T.N. wishes you and your family
a wonderful Pesach!
Passover begins with the close of Shabbat on Saturday, March 27th and continues until nightfall Sunday, April 4th.
*Please note: The permissible time for eating of Chometz ends on Saturday morning.
The latest time for eating Chometz in Huntington, NY is 10:30 am.

For more information regarding the significance and observance of Passover, please click here. 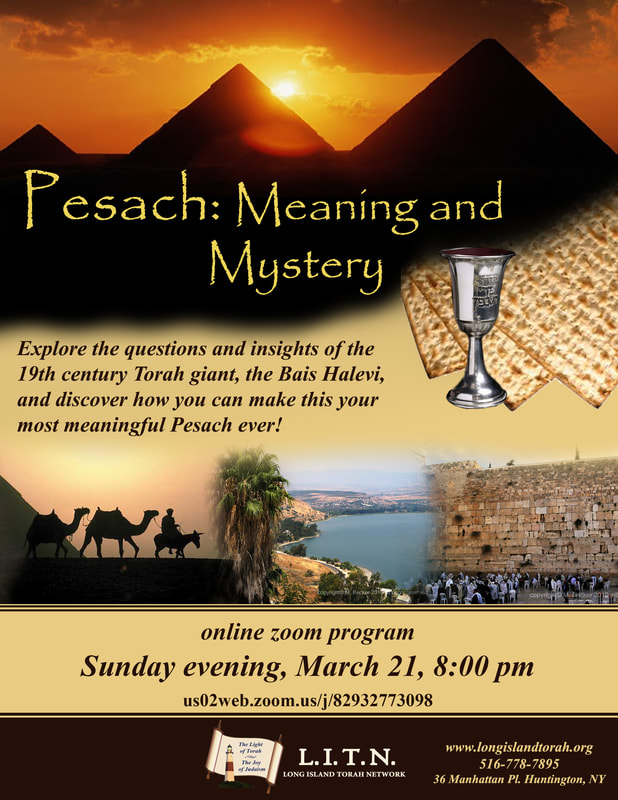 L.I.T.N. wishes you and your family
a wonderful Shavuos holiday!
The holiday of Shavuos - which begins at sundown Thursday, May 28th and continues until nightfall Saturday, May 30th - marks the anniversary of the Revelation on Mt. Sinai and the giving of the Torah.

On this day - the 6th of the month of Sivan - just over 3300 years ago, the Jewish nation surrounded Mt. Sinai. The mountain was trembling and ablaze. Thunder, lightning and the powerful sound of the shofar filled the air. The entire nation of  2.5 million people perceived the Divine Presence and heard the voice of G-d Himself utter the first two of the Ten Commandments.

On this day, when G-d's gift of the Holy Torah was joyfully accepted, an eternal covenant was sealed between G-d and the Jewish nation. Indeed, the Revelation on Mt. Sinai is compared to a wedding ceremony and the holiday of Shavuos marks the anniversary of this eternal loving union between us and Hashem. 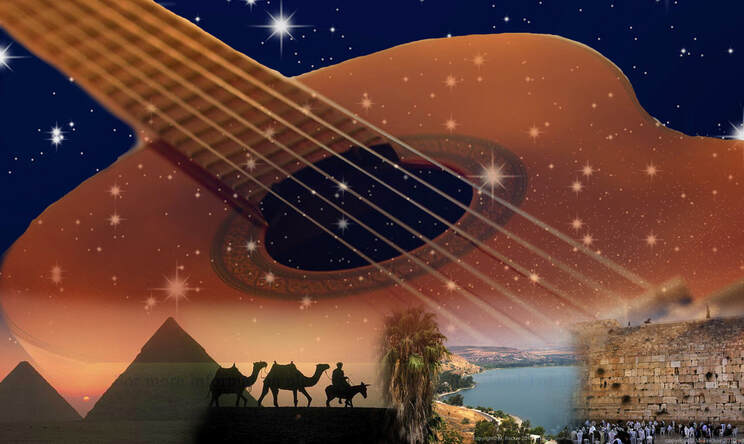 Though this Pesach is different and we may be physically separated from each other, in these trying times, it is all that much more important for us to come together. Let's join together with Rabbi Mendel Becker for an evening of song, music and inspiration. Let's celebrate Pesach together, let's pray for healing and strength together and let us grow together.

Monday Evening, April 13th
8:00 pm
Zoom information will be sent via email.
If you have not received the information, please email us at info@longislandtorah.org
We will open the program tonight with a short recitation of a chapter from psalms
and a prayer for those who are ill.

Please click here to view or download a Hebrew and English copy of the chapter.
(we will be reciting chapter 121)​

L.I.T.N. wishes you and your family
a wonderful Pesach!
Passover begins at sundown* Wednesday, April 8th and continues until nightfall Thursday, April 16th.
*Please note: The eating of Chometz ends earlier on Wednesday morning.
The latest time for eating Chometz in Huntington, NY is 10:45 am.

For more information regarding the significance and observance of Passover, please click here.
L.I.T.N. wishes you and your family a

For information about the meaning and observance of the holiday of Purim, please click here.
Chanukah - History, Meaning, and Observance