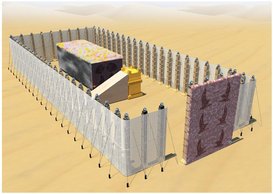 Terumah means “donation.”  Hashem instructs Moses to ask the Children of Israel to donate material for the Mishkan, or Tabernacle. “Let them make Me a Sanctuary,” says Hashem, “and I shall dwell among them.”  The Mishkan was a smaller, portable version of the later Holy Temple in Jerusalem. Materials needed included metal, wood, fabric and gemstones.
The Torah first describes various artifacts that would be housed in the Mishkan:

The Ark – a gold-plated wooden chest containing the Tablets of the Law. The Ark was the only object in the inner chamber of the Mishkan. Its lid, made of solid gold, was topped by two Cherubim, images of angels with outstretched wings and children's faces.

The Table – also of gold-plated wood, it supported an array of shelves which held twelve loaves of bread. Every Sabbath, the loaves were removed and eaten by the priests, and fresh loaves placed on the shelves.

The Menorah - of solid gold, it had seven branches holding oil lamps, which were lit each evening.

​         The Menorah and Table were housed in the outer chamber, along with the Incense Altar, described in the following Parsha.

The Torah now describes the structure of the Mishkan itself:

​        The Roof was made of three different-colored layers, each of fabric or animal hides.

The Walls were gold-plated wooden beams that stood vertically and were held together by  horizontal bolts.

A Curtain separated the inner and outer chambers of the Mishkan, and another one served as the  door to the outer chamber.

Outside the Mishkan, in the Courtyard, stood the main Altar, made of copper-plated wood. The Courtyard itself was surrounded by a fence of white linen curtains held up by posts.

​According to the Midrash, the Mishkan was an atonement and a sign of reconciliation after the sin of the Golden Calf. Although that incident is described later in the Torah, events in the Torah are not necessarily listed in chronological order.